XArc specializes in space architecture and advanced technology applications for aerospace projects in space exploration. This includes Earth-based space related facilities such as design and development of spaceports, or terrestrial analog environments for research. Additionaly, as a multi-disciplinary architectural systems consulting firm we provide services in concept development, visualization, programming and planning of infrastructure and facilities associated with transportation systems ranging from ground transport to air and space modalities.

XArc is partnered with the Korea Institute for Civil Engineering and Building Technology (KICT) for In-Situ Resource Utilization (ISRU) research for planetary construction. ISRU refers to the production of useful materials from the resources available at a given location, such as using Mars or lunar soil (regolith) as a construction material. XArc was commissioned by KICT to conceptualize a building design for its Extreme Construction Research Center. KICT is a science & technology government-sponsored research institute of the Republic of Korea. The space facility research center is to be located on the KICT campus at Goyang, South Korea. 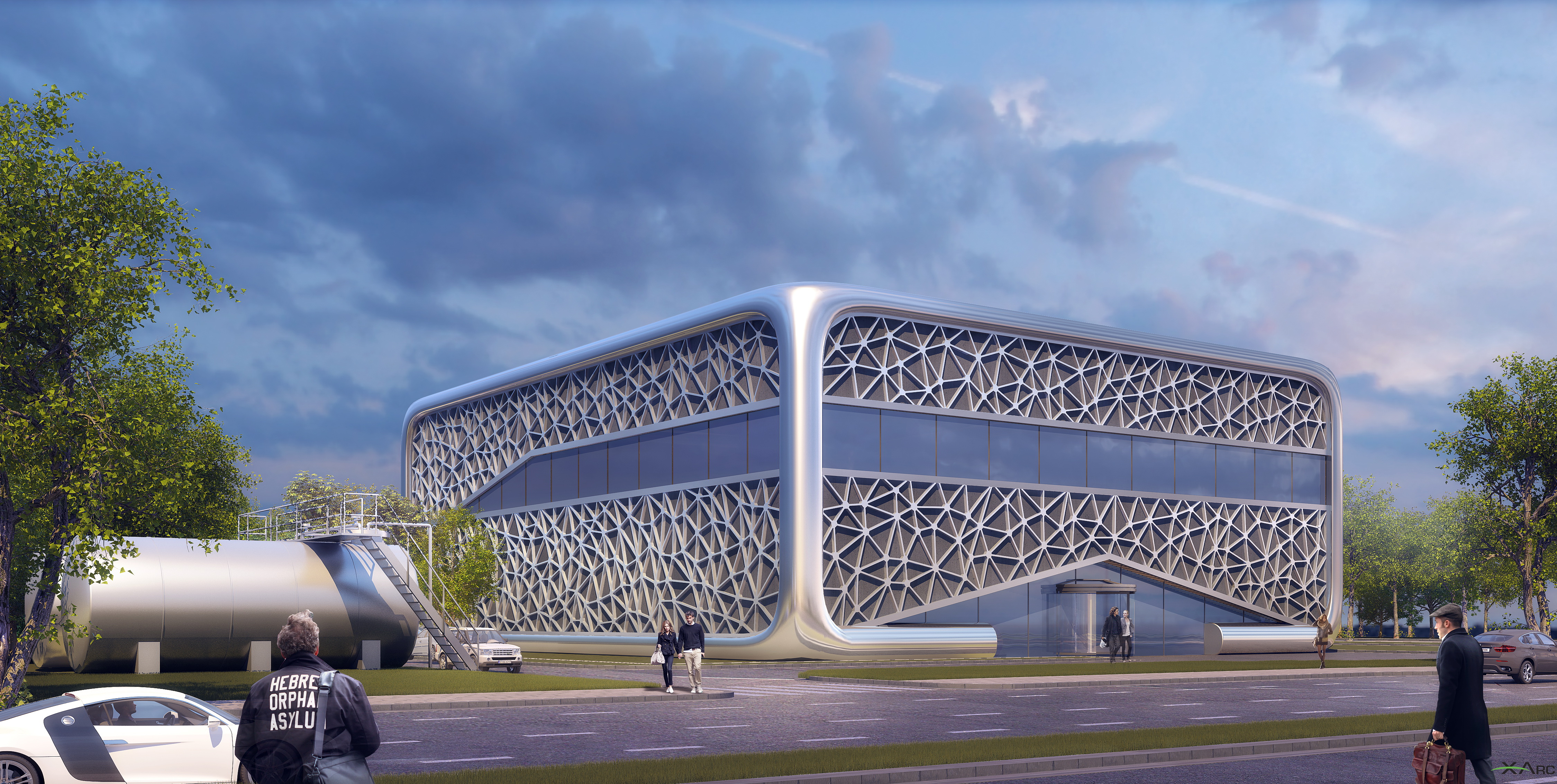 The facility will house one of the world's largest vacuum chambers for space environment research of ISRU technology applications. Known as a "Dirty Thermal Vacuum Chamber" (DTVC) because it contains simulated lunar or Mars regolith within the chamber for testing planetary construction methods in excavation, robotics, drilling, and 3D printed habitat technologies.

The state-of-the-art vacuum chamber is designed to realize testing environments at ultralow temperatures and close to a vacuum state as well as those similar to lunar or Mars surfaces using artificial simulants. The large vacuum chamber allows for the simulation of lunar and Mars regolith environments. KICT plans to have its full scale vacuum chamber operational by 2019, and intends to make the facility available to the global space exploration community. 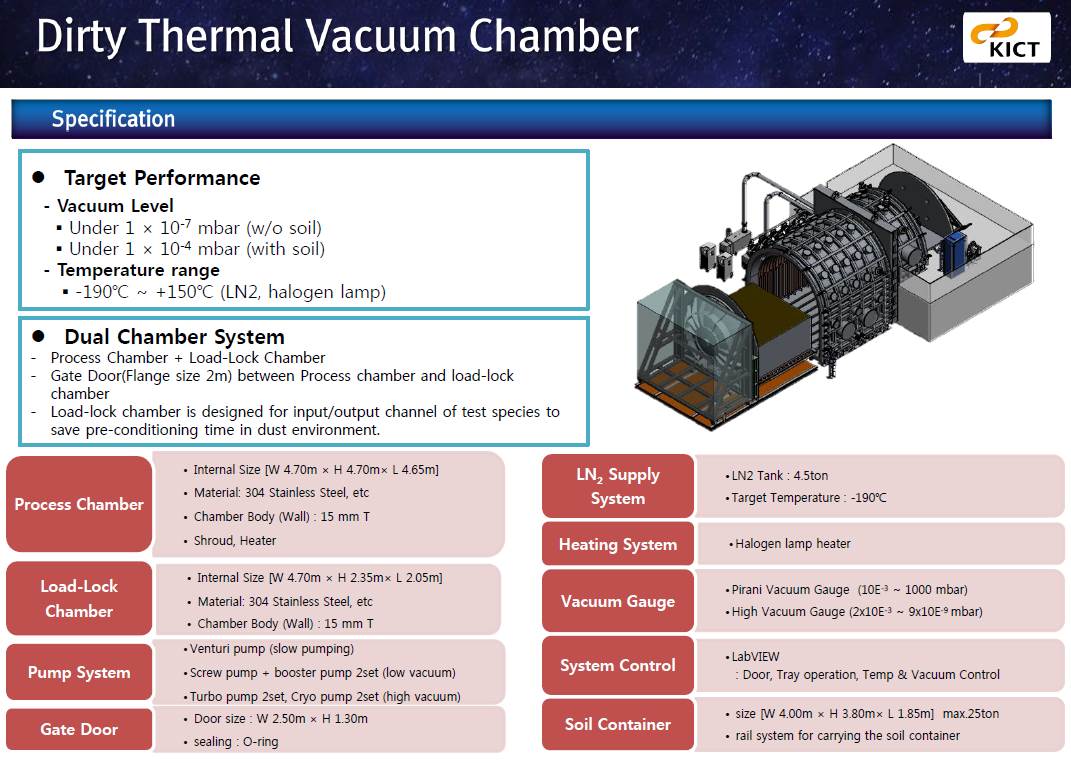 Design enhancement concept for the Stinson Airport Air Traffic Control Tower. Design goals were to reflect the cultural history and identity of South San Antonio, and inspire civic pride while also honoring the legacy of Stinson Field with a design response to the aviation mission for the next 100 years.

The San Antonio missions have withstood the test of time for hundreds of years since the beginnings of the first European explorers and settlers of the area. The recent designation of the missions as a World Heritage Site is testimonial to the importance these iconic structures will continue to be at the heart of a regional experience for residents and visitors alike. Likewise, aviation in San Antonio dates back to the beginnings of flight with many notable and historical aviators based in San Antonio playing key roles in the development of the industry. Stinson Airport and its founding namesakes are testimonial to this spirit of exploration and maverick endeavors that signifies the San Antonio experience. It is with these two historical backdrops that we approached our tower design as something that would reach back and pay tribute to the foundations of the city and the aviation industry which the tower serves, yet be forward looking in appearance for another 100 years of aviation service and a pride to the community. 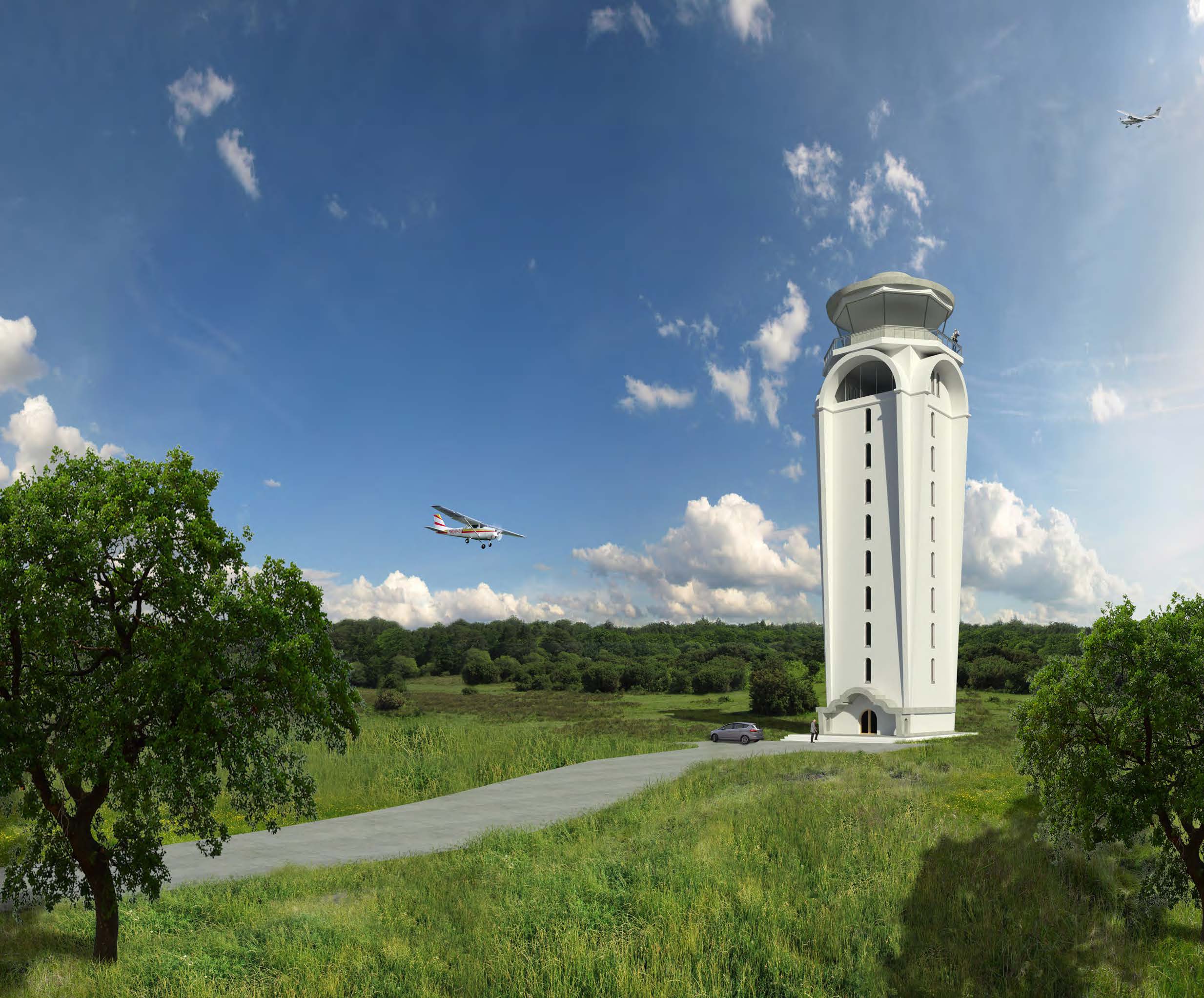 We sought to identify architectural features and textures from the area missions which could be reimagined with a forward looking design for the tower. One such mission caught our attention with its subtle yet commanding features of architectural style. Mission San Juan with its restrained edges, understated textured motif, and demure façade stood out as a role model.

In response to a call for a "VIA Villa Vision" ideation, XArc's redevelopment proposal calls for utilizing the existing elevated corridor between Buena Vista Street and Commerce Street as the gateway route for tying San Antonio's Westside to downtown. Integrated with a multi-modal transit gateway to include high speed rail and/or hyperloop at VIA Villa. This corridor, adjacent to the VIA Grand Depot, ties the Westside to downtown by encompassing mix-used development and promenade plazas down the center of the corridor, comprised of the area from Market Square just east at I-35 and up to the near Westside extending west of the rail tracks to Alazán Creek. We envision the Grand Depot multimodal transit facility at the center of a Buena Vista/Commerce Streets corridor merged with Frio Street for new urbanism development. 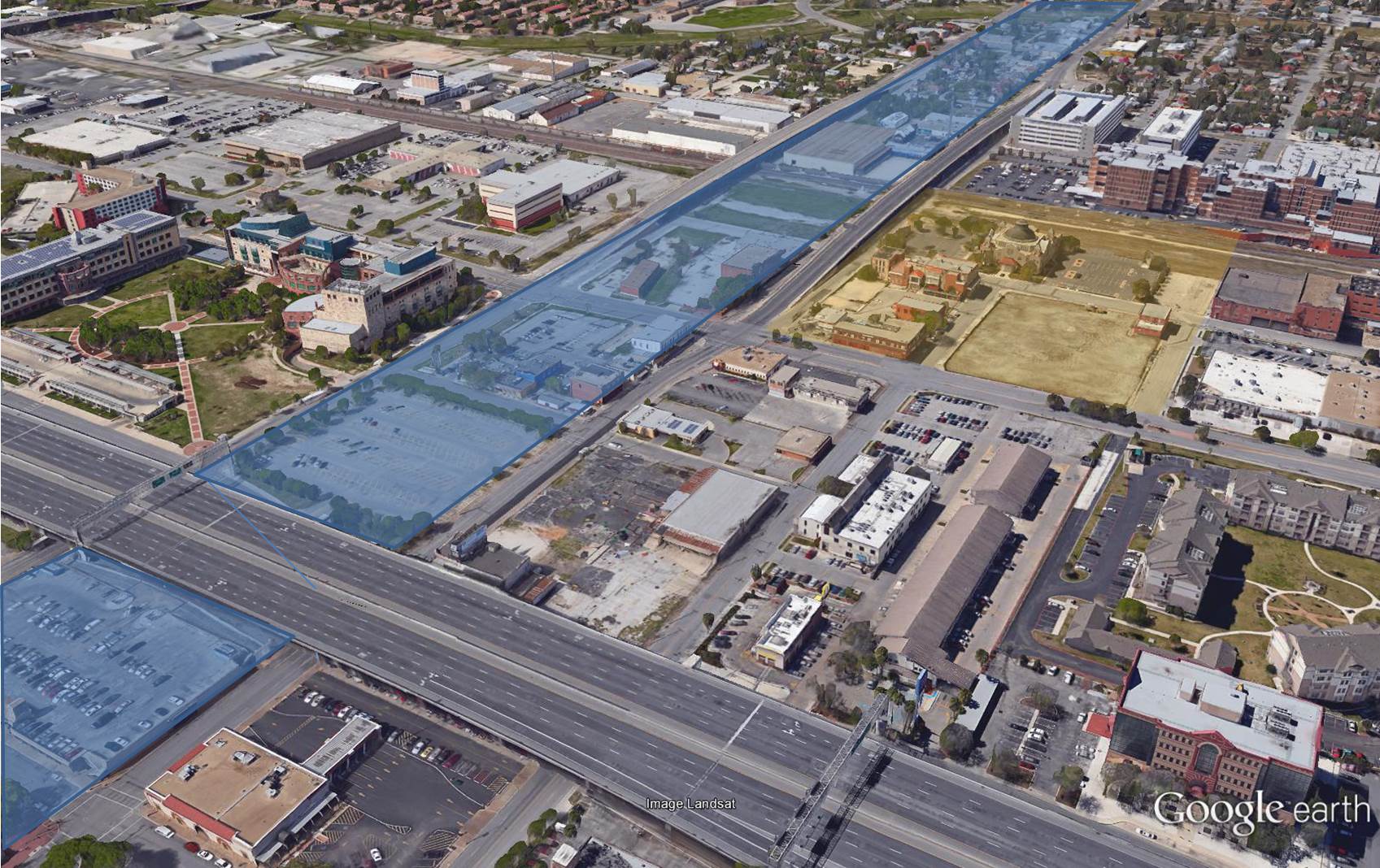 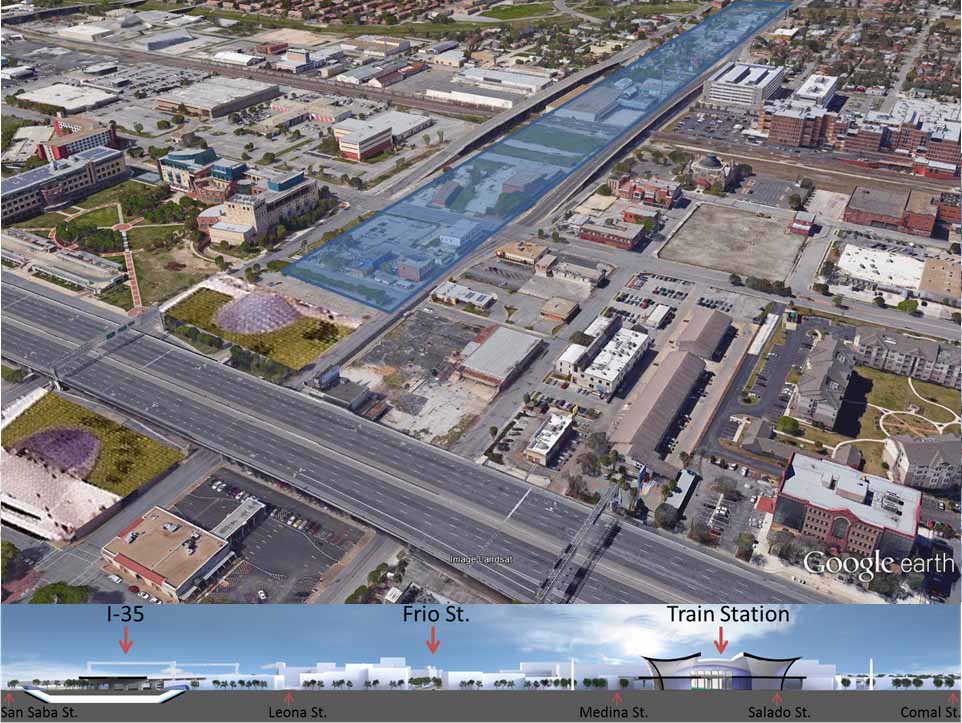 Redevelopment Corridor - The I-35 highway barrier is broken by an expansive underground pedestrian mall passageway accessed from park-like settings on both sides with glass canopied large openings to escalator entrance. 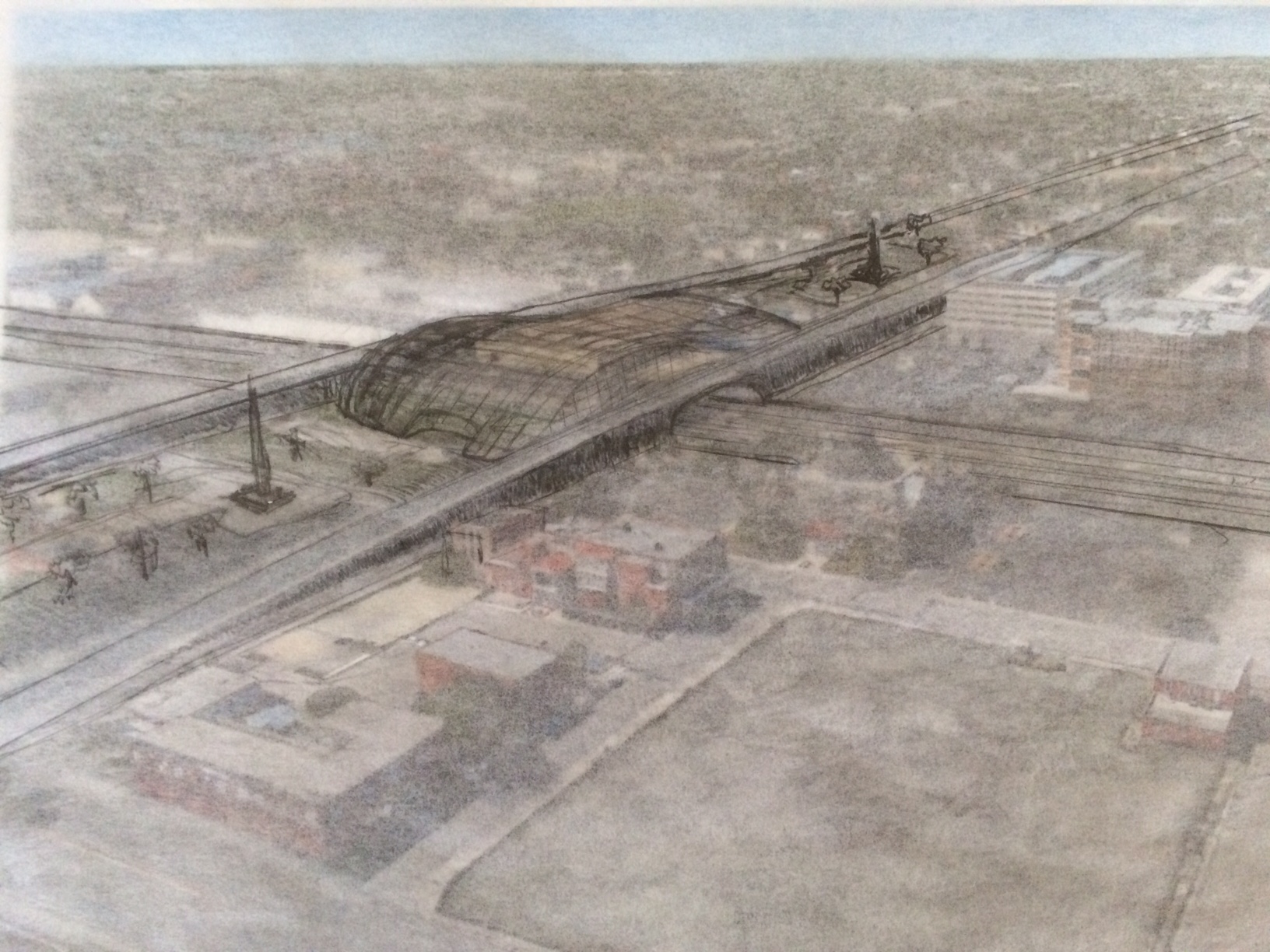 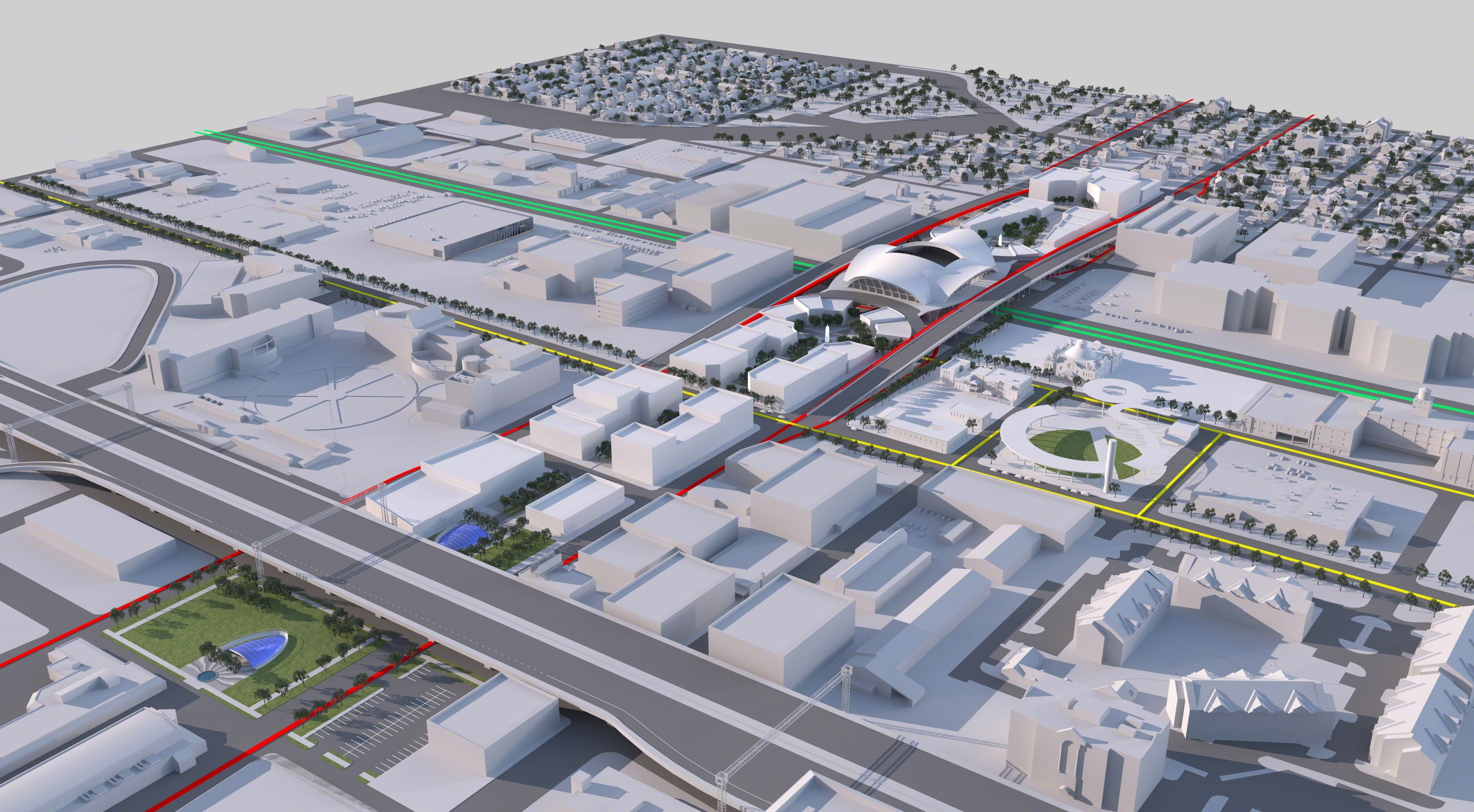 Ideation for a Grand Depot multimodal transit facility to include high speed rail and/or hyperloop. The grandeur of this facility essentially moves the traditional east/west dividing line of I-35 to the station itself as the development of the promenade expands on both sides of the VIA Villa transit station. 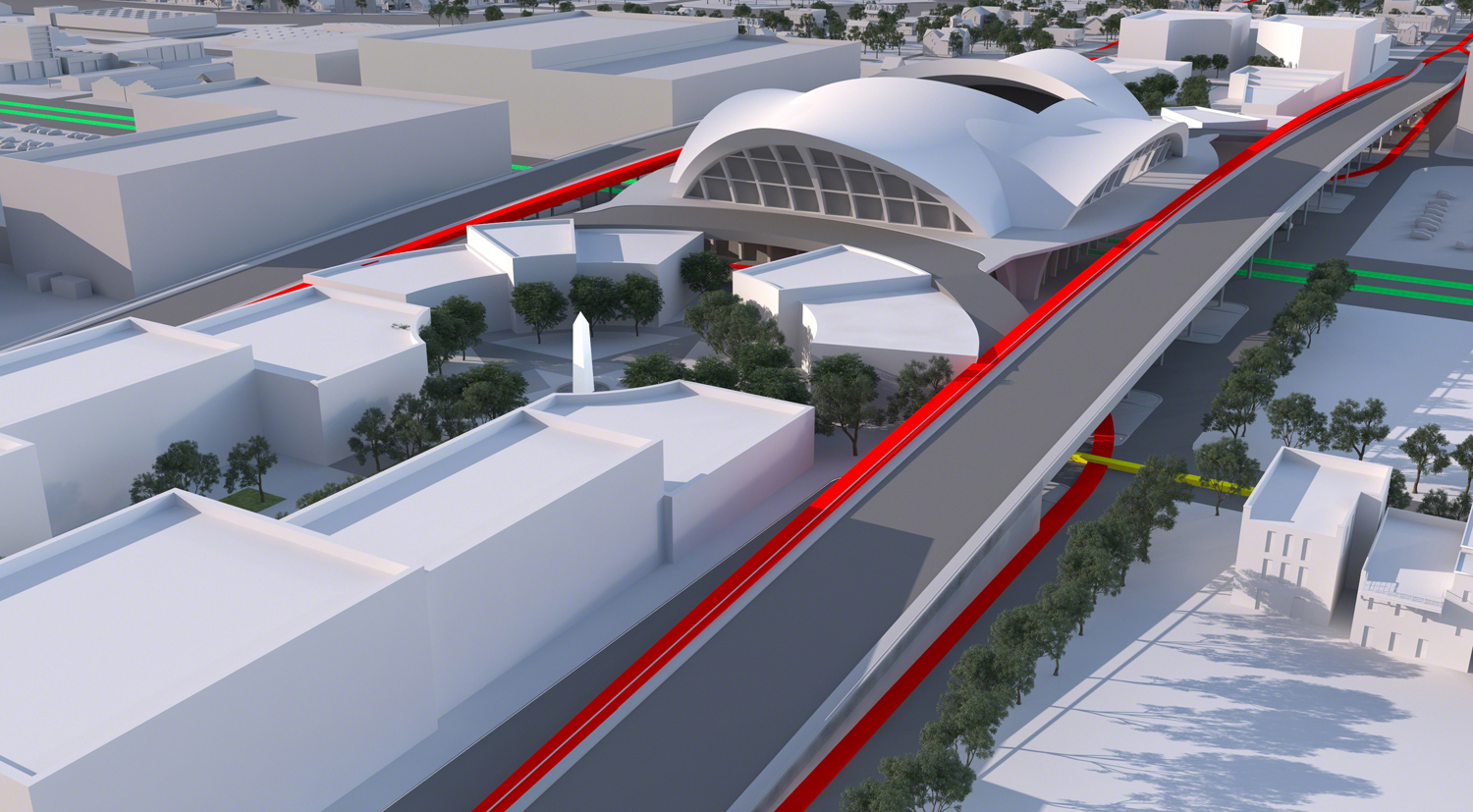 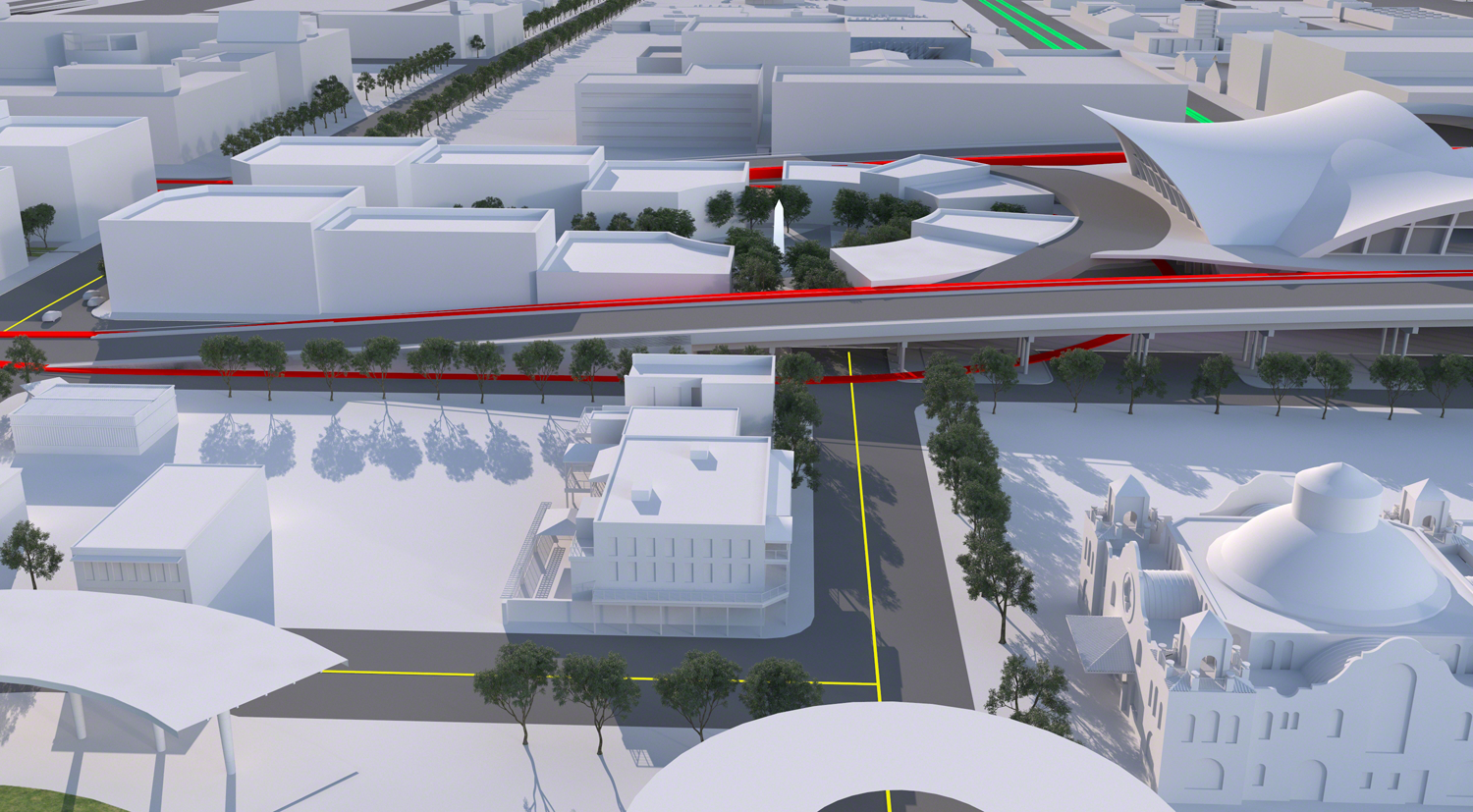